An Astronaut’s Guide to the Wild Atlantic Way

We’re huge fans of Canadian Astronaut Chris Hadfield here at OSD.  And you would want to be living under a rock to not have come across him in the last year!

He first came to our attention last May when he recorded the first ever music video from space, while aboard the International Space Station. His version of David Bowie’s ‘Space Oddity’ went viral and has recorded a massive 21 million views in the last year. 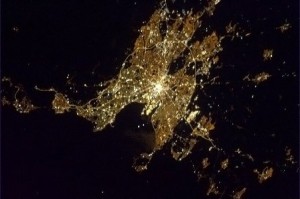 The former Space Station commander also completed another first last year by putting Ireland on the map with the first-ever tweet from space ‘as Gaeilge’ “@Cmdr_Hadfield  : Tá Éire fíorálainn! Land of green hills & dark beer. With capital Dublin glowing in the Irish night.” – was accompanied by a night shot of Dublin taken from the Space Station.

Earlier this year Chris became an ‘ambassador’ for Irish tourism during a trip to Ireland in January. Today Tourism Ireland launched a series of videos featuring the famous astronaut during his travels. He has made four videos featuring the Wild Atlantic Way in the Inishowen peninsula, Co Donegal, hurling, Titanic Belfast and the Guinness Storehouse.

All four films, along with accompanying feature articles, will be promoted on Tourism Ireland’s website, Ireland.com, and will be shared by Tourism Ireland with its Facebook and Twitter followers and on its YouTube channel.

And if you haven’t already, check out the Chris’s latest updates on Twitter @Cmdr_Hadfield, he has over 1 million followers!!

To view all four videos check out www.ireland.com/articles/chris-hadfield

OSD Digital Agency conducted a comprehensive Digital Marketing "Health Check" for the Bush Hotel which we found to be very beneficial and helped identify and prioritise a course of action. The review and recommendations for our brand website, reputation management and digital marketing strategy were very actionable, everything was explained in straightforward terms during the onsite consultation. Graham was very approachable - we had lots of questions, all of which were answered with straightforward explanations which were easy to understand. As a follow-up to the review, he compiled a sheet of recommendations for action with suggested deadlines for these, which we found very useful and achievable. I would recommend this service to any business seeking to review and improve their Digital Marketing efforts.